Salinity in soil is caused by irrigating with salty water. Water then evaporates from the soil leaving the salt behind. Salt breaks down the soil structure, causing infertility and reduced growth.

Use of humic acids may prevent excess salination, especially given excessive irrigation. Humic acids can fix both anions and cations and eliminate them from root zones.

Planting species that can tolerate saline conditions can be used to lower water tables and thus reduce the rate of capillary and evaporative enrichment of surface salts. Salt-tolerant plants include saltbush, a plant found in much of North America and in the Mediterranean regions of Europe. 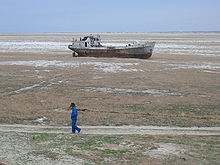